Two Tales of One City

The conflict of two different systems has never been as prominent and breathtaking as the ongoing Hong Kong incident. Outside of the city once regarded as one of the most important economic centers in the world, however, two extremely distinct tales covering the story can be found on the borderless Internet. Press from the western world states it as a prodemocracy protest against communist China, fight for freedom, and the enforcement Hong Kong police is applying to peaceful protesters is illegal and improper. Press from China states it as a riot backed up by western countries, and police is respectful for protecting Hong Kong people from the violent thug.

I’m curious how meta narrative over the press can form and constrain the reports into one stream of information. And in this project, I’ll train different models based on different sets of news from “western world” and China, and if any, see how contradictory and bias both of them could be - when learning just from one information source.

The data collection process for this project took 99.999% of the time. I didn’t realize how difficult it could be to gain a reasonable amount of news reports for machine learning to learn, until I started to collect them.

Firstly, I tried to write a web crawler to download text from official websites of major press like CNN and BBC with Selenium WebDriver. Since every website has its own page and html rules, I need to adjust my code (GitHub) for each situation to get content from them. After hours of debugging, the code could work in the list view and download title and url of articles, but when it comes to the content, websites plays very well of avoiding anyone to read even directly from html tags. I had to give up collecting the body part, but train the model only with titles of the articles.

Although my own code works fine getting titles from the websites, the process actually relies on a web driver opening websites locally and reading content from the html file. It’s really slow and taking too much computing and connection resources. Then I finally realized that those press should have web APIs for people to use. The answer is YES and NO. CNN has its own content API but you need to apply first, and the project is terribly maintained. Many others don’t have, or I couldn’t find clear documentations.

Finally, I found NewsAPI that could easily fetch title and even content (for paid users) from news resources. I set it up and it ran very fast. However, three very annoying facts made me have to re-start again and try to find another API:

I need to train 4 models in total: 2 for title writing, and 2 for description writing.

The training of the models were rather painless and fast. The loss of all four models went down to nearly 0 after several thousands of batches. However, there’s some problems of training-charRNN: when you continuously train different models and don’t delete or move out models generated from the previous training, the model saved will only always represent the result of the first training, even they are named differently by the name of input file. That’s why when I trained one file after another, all I got was the same result (either both Chinese or English): 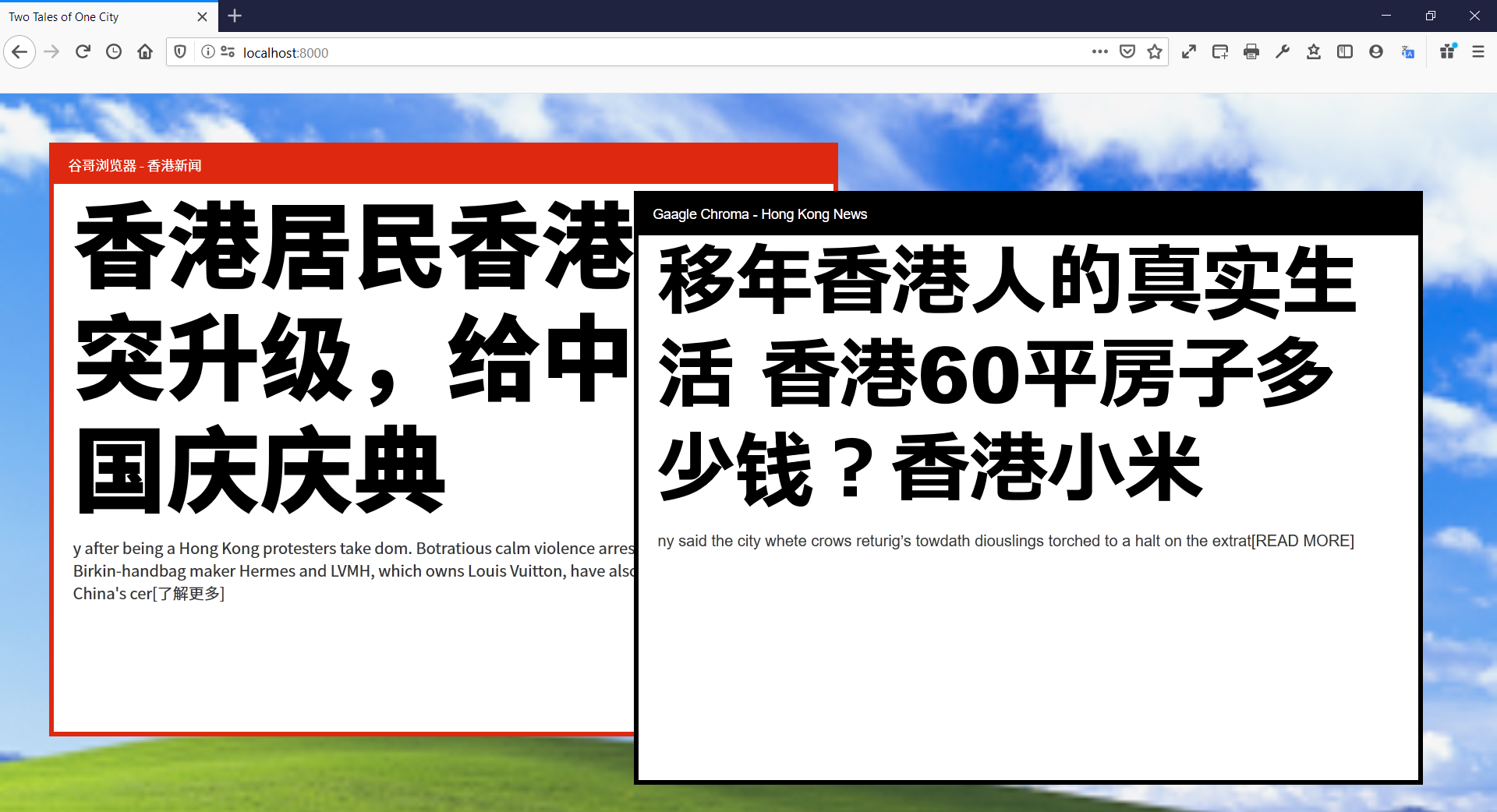 Screenshot of the Project in Progress

I’ll then have to retrain the models - which takes hours.

The project is now on GitHub and a live demo is hosted through Netlify.

The windows can be dragged around, like real windows, making it more like real web browser interface. Though I didn’t have time make the UI details perfect. (It’s also because of the style of the project I chose to have.) Every time you click on either of the windows, the “desktop” background image will change (based on image URLs gained through NewsAPI).