Self-driving cars: Who to save, who to sacrifice? 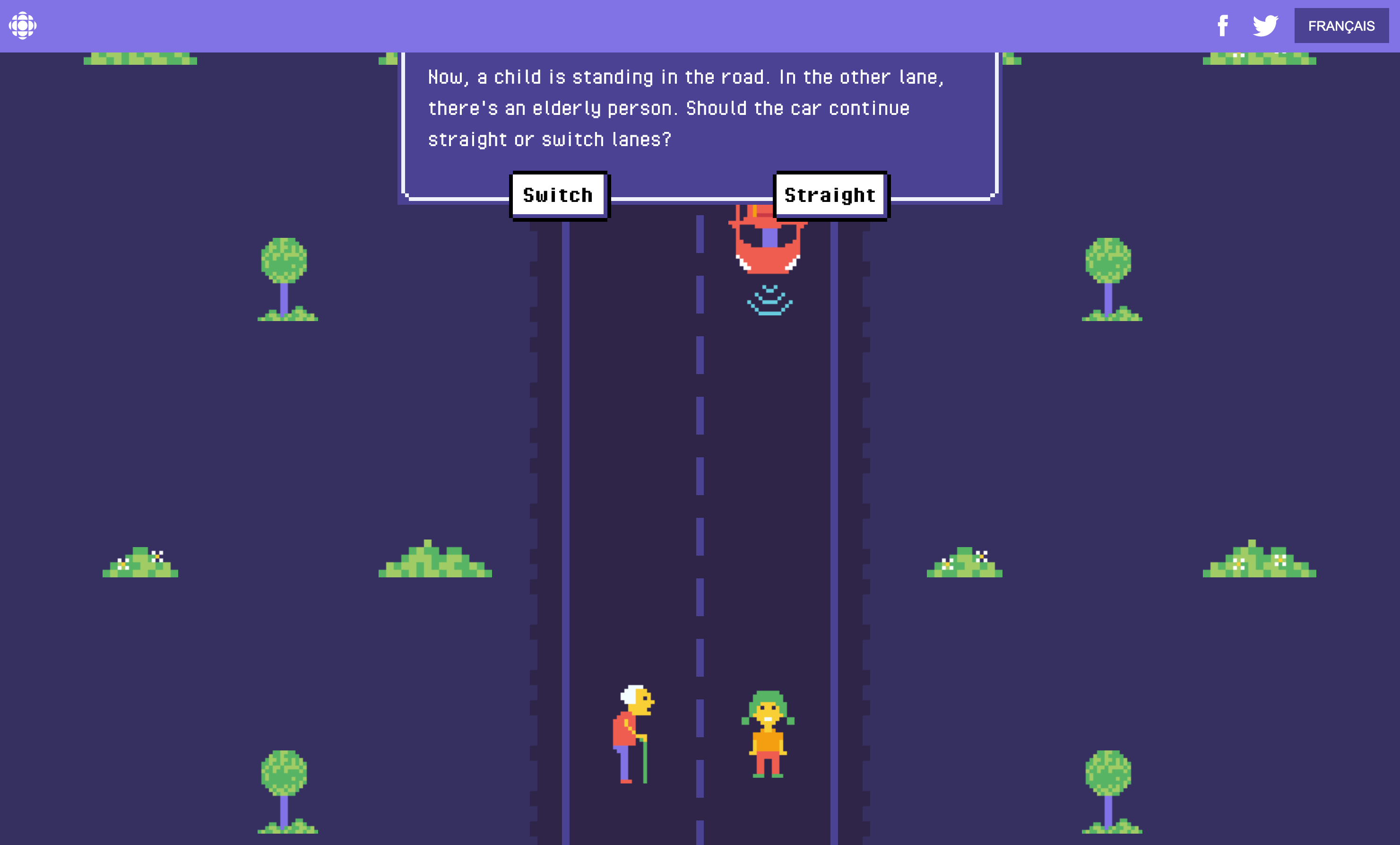 Trolley problem might be the most famous and widely discussed dilemma in ethics and psychology. Here the author uses illustration to tell us what decisions we are actually making, or for the self-driving cars to make. With graphics instead of words, readers have a greater empathy with the ethical dilemma and gain a deeper understanding of how scary it could be for algorithms to decide for us. I also appreciate the fact that it doesn’t allow you to change a made decision (unless you refresh the whole page) since that’s exactly what the reality is - once it’s done, there’s no way back.

Satellite Photos of Japan, Before and After the Quake and Tsunami 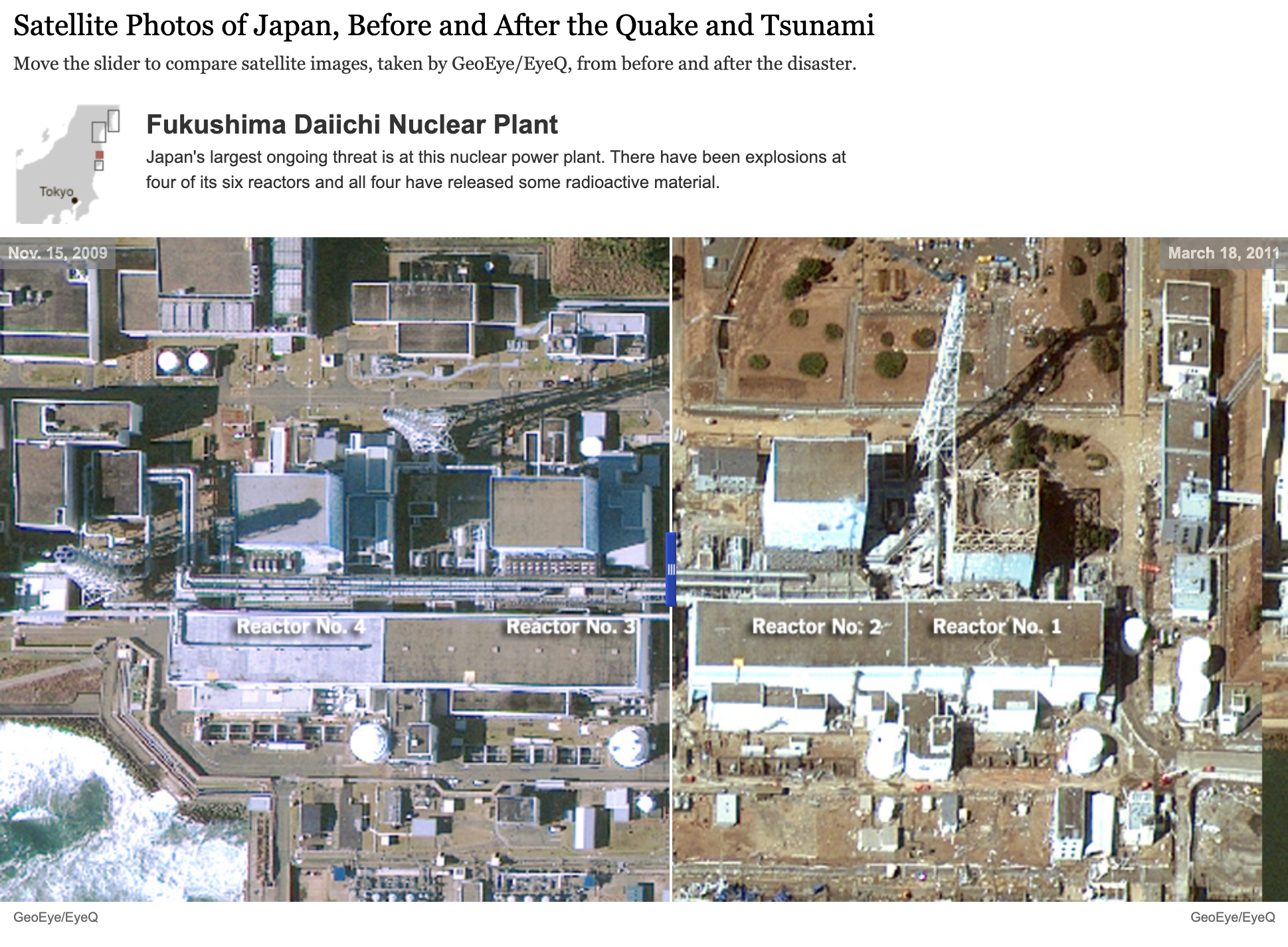 The visualization illustrates how the earthquake and tsunami affected the region. Its success lies in the visual impact and interactivity. Instead of using numbers, illustrations, or words, the editors objectively present the untouched pictures to the readers, as in this case, the fact itself is stronger and more impactful than anything else. Moreover, the whole presentation and information are interactive. While we see tons of interactive visualization these days, most of them has a slider or textbox aside, with which users can only interact with the body indirectly. Here, however, the slider bar is placed right at the middle of the images, allow users to interact with it directly to better understand how powerful the disaster was.

One Race, Every Medalist Ever 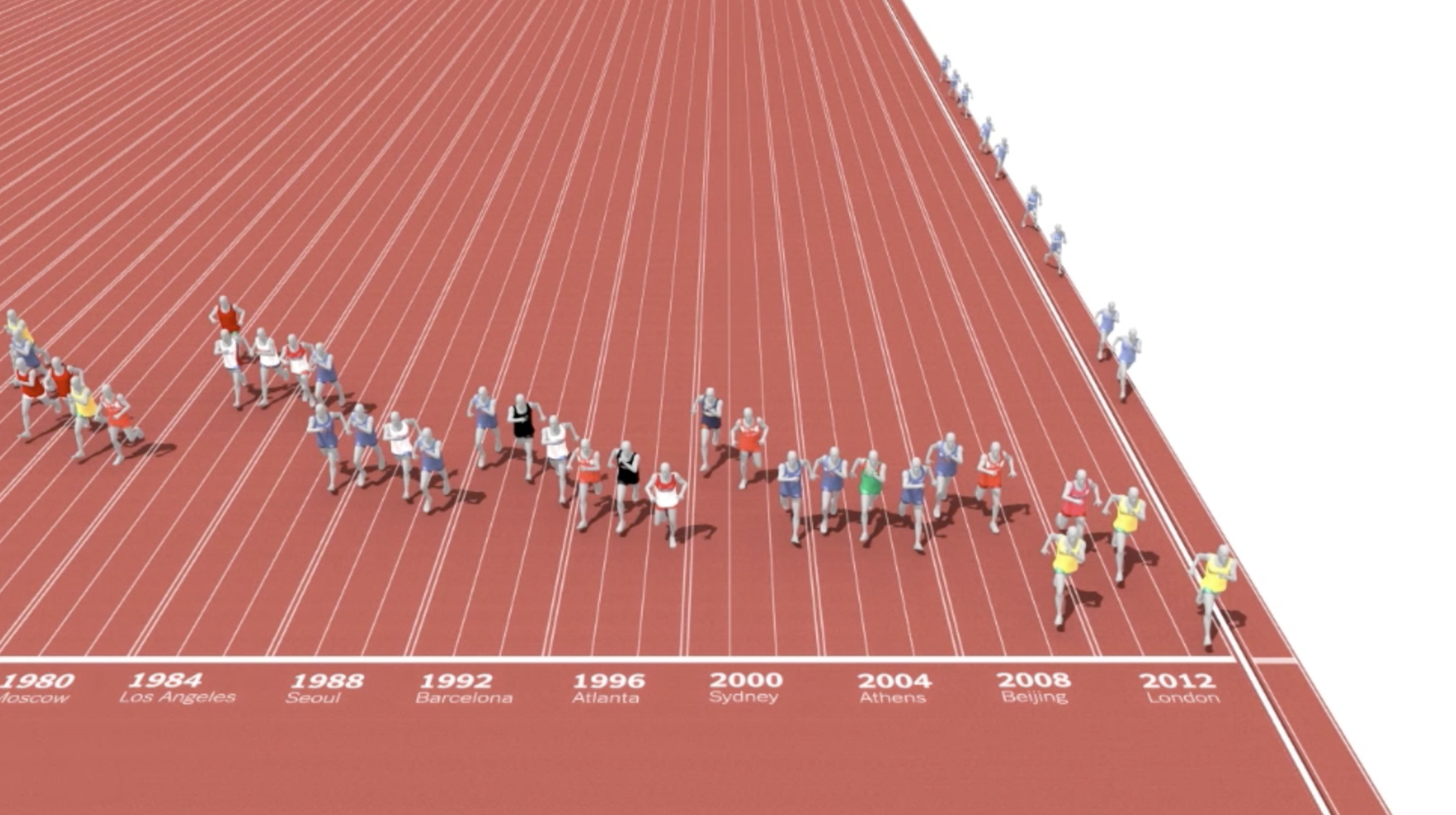 Essentially, it’s just a scatter plot, while with 3D modeling (with details including the nationality of the athletes), the clear narrative, and smooth animation, it efficiently explains how we run faster and better since 1896, as a result of better nutrition, equipments, and training skills. Thanks to the dynamic viewport, viewers will be able to see the graph from various angles to learn different information that might need a dozen of different plots to visualize. I also love how they “visualize” 3 seconds that today’s gold medalist runs faster than that from more than 100 years ago - a pause of 3 seconds.

Source: CNN (The US has 4% of the world’s population but 25% of its coronavirus cases) 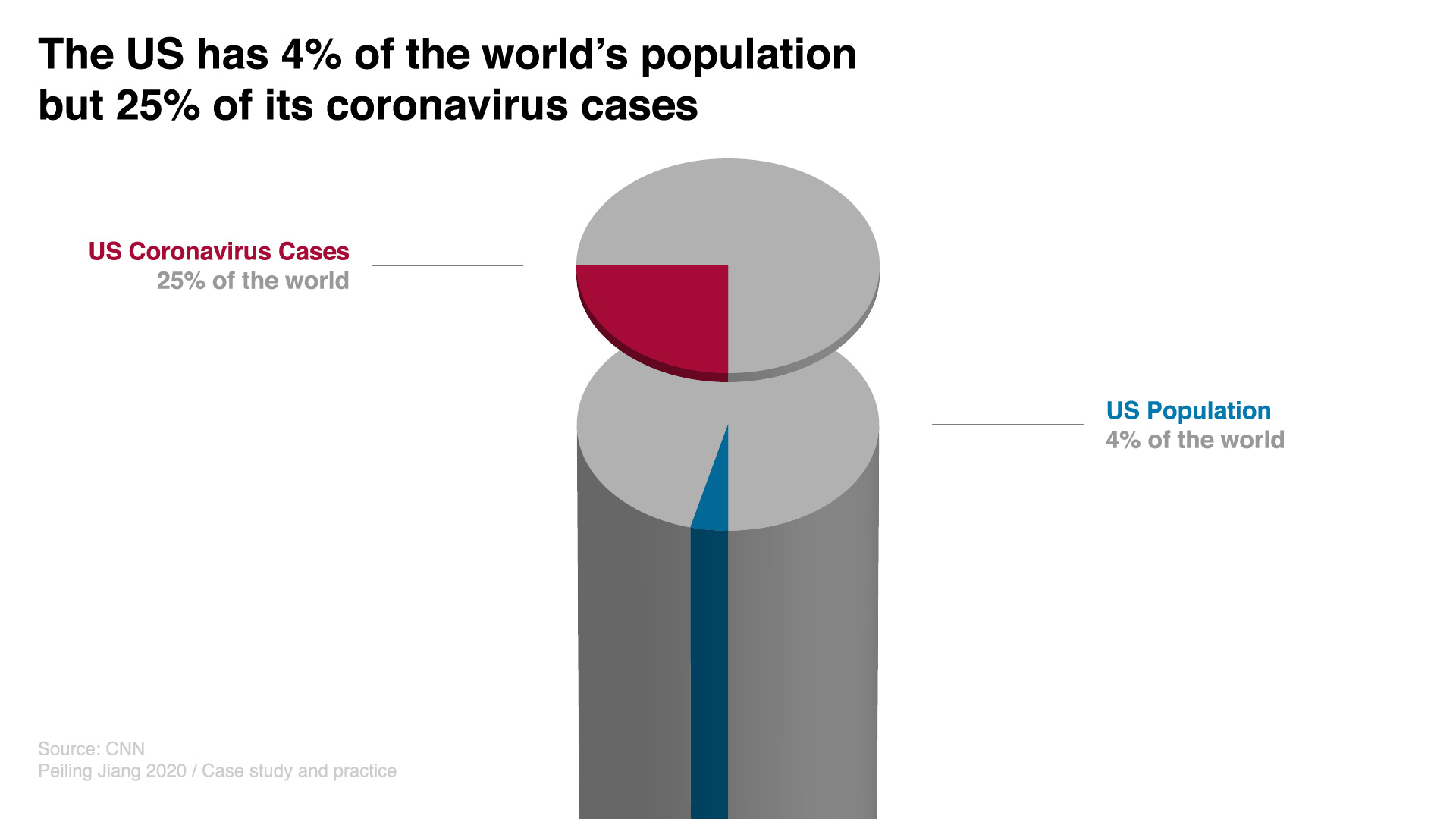 This approach might confuse readers as the 3D extrusion distracts from versus reinforces the message. Eyes start to read the wedge extrusion and the unique shape of the blue wedge instead of focusing on the comparison of the two wedges. 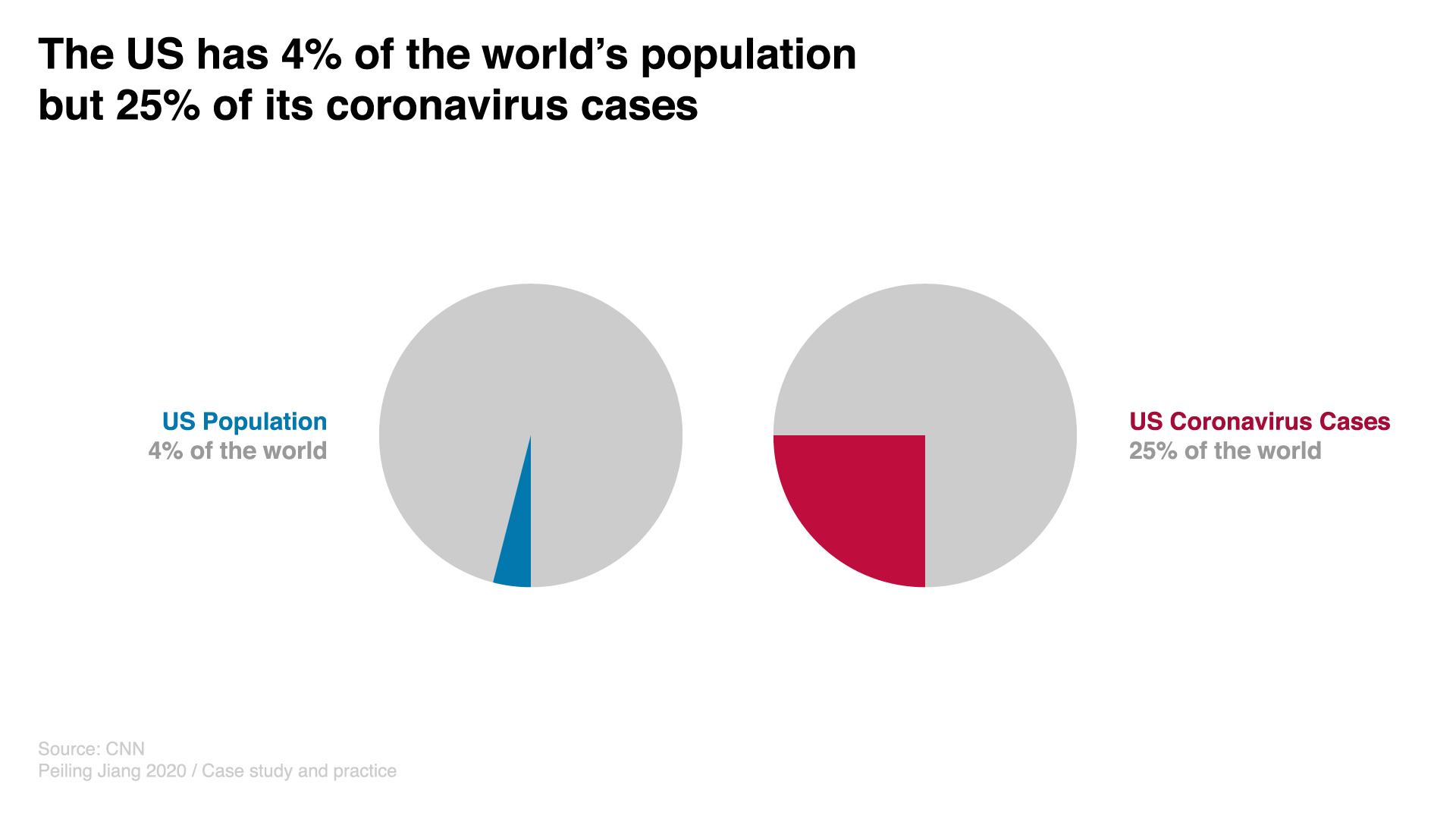 Link to the video.

Those cared by the readers make the greatest impact on them. Climate change is a huge topic concerning the globe, the human being, and multiple generations. Thus, it’s hard for a person to take it personally and establish an empathy connection between the issue and own life. The creators of the piece, to address the problem, connect the problem and users' own life in three ways:

Put controversial and conspiracy theories aside, and focus only on the confirmed data and main storytelling. While the main debate over climate change usually lies on the scale of tens of millions of years, the visualization, to deliver the idea that our globe is indeed getting warmer in the past decades, focus only on the related and verifiable information. As a result, the narrative is strong and impressive.

Data scientists love descriptive statistics, but sometimes single data points can tell a better story. In fact, statistically, the average global temperature is barely useful as it fails to cover any of the real situations around the world, no need to mention the poles and hottest deserts. The descriptive statistics can be especially misleading in climate issues as it can be affected by thousands of factors and an average can’t really tell a good story for every distinct place. However, with the data from only one place, the hometown, the creators were able to better illustrate the idea and associate it with the users themselves.

Link to the podcast.

The first thing I noticed from the story is that collecting and preprocessing data is tedious even for media giants like the NY Times. While they have a team of full-time crews to do the cleaning and style matching, this could become a major obstacle to others with fewer resources - which could have been avoided in the first place. We have set up standards in so many areas and industries, as a result boosting the efficiency of them. Could it be possible to set standards on data collecting and publishing, at least for each case (e.g. infection data)?

The resolution of data is important. The resolution here measures the source of data points - nationwide or countywide. While it can also measure the dimensions of each data point - does it just tell you that one more person is infected, or it also records their age, the county they lived in, their race, and their ethnicity. With only the most “blurred” data, the author can only answer questions like

Then with data from the county-level reports, they started to understand

How were they (hundreds of rural counties) preparing? And how were they talking to people? How soon should government reopen or allow businesses to reopen?

Finally, with a database of 1.45 million cases from CDC, they can answer

While this is still not enough, as with many columns crossed out due to privacy concerns, they failed to answer

How many people are contracting the virus at work? Or how many are getting it from traveling or being at bars?

This adventure of queries — asking questions of the data and seeing what it shows, is the best example of how the resolution of data could affect the storytelling and questions to ask. And their passion and enthusiasm for asking challenging questions, again and again, is really inspiring and motivating.